Looking for a refined tool to blow past your business goals? Bucksense’s proprietary Algorithm allows you to optimize your ad campaigns based on your own KPIs.

The new Bucksense Optimizer has been conceived to evaluate and analyze the performance of multiple campaign variables, and so adjust the CPM to reach the goal.

How the Bucksense Optimization works

By analyzing placement data in real time and updating the bidding strategy, Bucksense’s Optimizer re-allocates campaigns towards those placements that are performing well, and so excludes those ones that don’t have the potential to achieve your KPI targets.

Bucksense’s Algorithm offers 2 different Optimization modes (CPA/CPI and CPC), which are set around 7 variables to refine bids towards a specific KPI.

All you need to do is:

Bucksense’s Optimization algorithm adjusts bids in real time, across hundreds – or even thousands – of placements (lines).

In a learning phase, the Placements (Lines) are scanned according to your Budget.
After which the Optimizer will automatically increase the CPM for all those placements that reach the Win Rate% defined.

Our Optimizer lets you set the Number of Acquisitions/Clicks a Line (Placement) should reach in order to be considered well performing.
Besides, you can also define the CPM increment (%) for these placements.

However, it is of paramount importance to set a spend in order to evaluate every single placement, and so let our Optimizer identify those ones that are performing well according to your KPIs.
This value is based on your Optimization Goal (please note that the spend value has to be a multiplier of your Optimization Goal).
Finally, you are free to add the Daily Cap and the Total Budget that need to be assigned to every high-performing placement.

How to set the Optimization behaviour

You can set your Optimizer behaviour in the Budget & Spend Type Campaign section of Bucksense console.

In the Optimization Goal field you need to indicate the target you want to achieve, in order to let our Algorithm optimize the campaign based on this Goal value.
Then, choose your Type of Optimization between CPA/CPI and CPC.

Click on Customize Optimization Behaviour link to add your settings 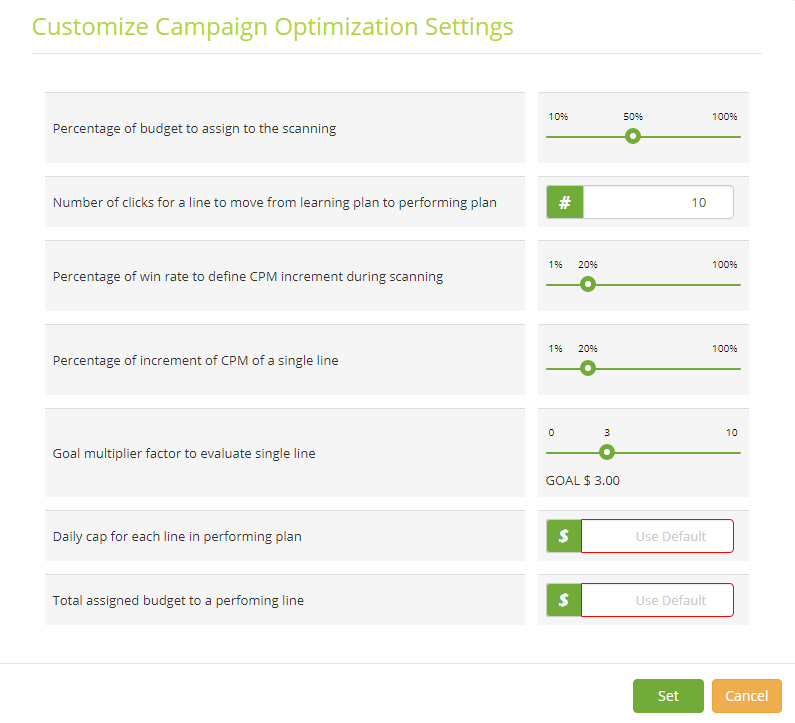 The Customize Campaign Optimization Settings pop-up allows you to set the following points:

Click on Set button to save your Optimization Behaviour

Once you have completed all the Budget remaining settings and activated your campaign (see here how), the Bucksense Optimizer will start to scan placements, analyze performance and update bidding strategy in real time. 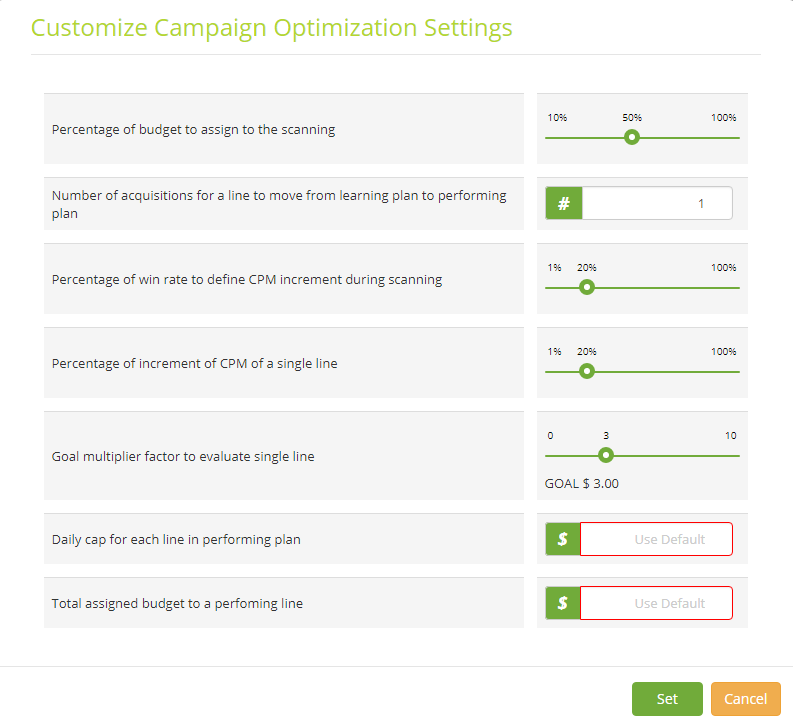 See here how to view the Bid Optimization Reports.